The ancient red dragon slams down onto the cave floor, the force of its impact disturbing its hoard and sending treasure flying. You and your party aren’t afraid – you’ve slewn dragons before. It starts the fight by breathing a plume of flames towards you and your companions. Scorched but still standing, you begin to fight, scoring hits with arrows and blades. Seconds later, it opens its maw again, coating the cave in liquid fire. And then 6 seconds later, the dragon does this again, and then again… Welcome to Dissecting D&D 5e, a series of articles that analyze the design of fifth edition Dungeons & Dragons.

Before we begin, let me say that I love fifth edition. It’s accessible, easy to get into, and the community is wonderful. These articles are intended to help explore some design elements behind fifth edition, and to help Game Masters (GMs) customize mechanics to better suit their tables. 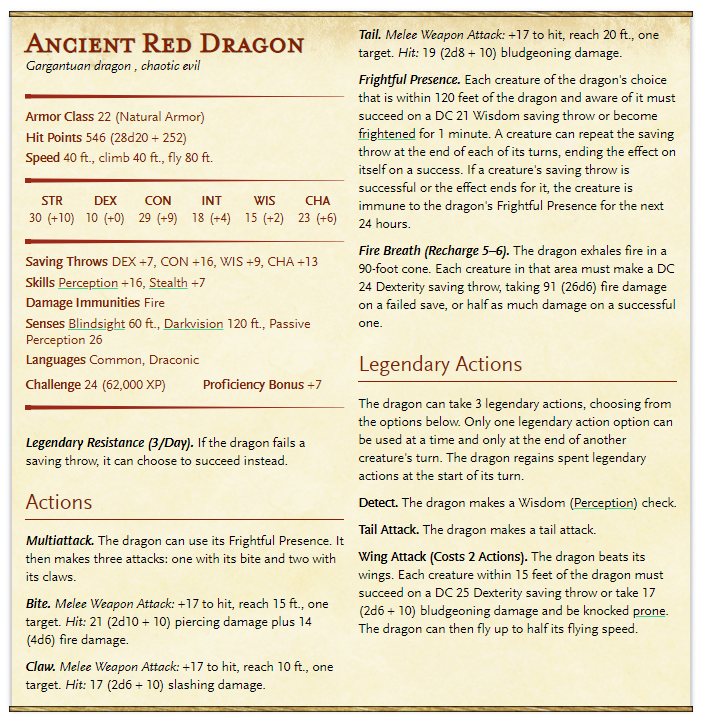 This Ancient Red Dragon has a Fire Breath which recharges on a roll of 5 or 6.

Recharge is added to powerful signature monster abilities, such as an Ancient Red Dragon’s Fire Breath or a Mind Flayer’s Mind Blast. The monster will generally want to use this ability to start combat as often as possible. Recharge typically prevents the monster from using the ability every turn, and most Recharge abilities refresh 33% of the time.

The Ancient Red Dragon deals an average of 69 damage on its turn if it hits with its bite and claw attacks. It deals 91 damage per player character (PC) who fails its Fire Breath attack (and a dragon can normally catch two or more PCs in its cone, especially if it takes to the air.) Like most other Recharge abilities, it’ll want to use this as often as possible.

Recharge adds tension to a fight and makes fights unpredictable. It’s exciting for both GM’s and players! Will you be able to kill the dragon before its fire breath recharges?

However, there are a few downsides to using monsters with this ability: 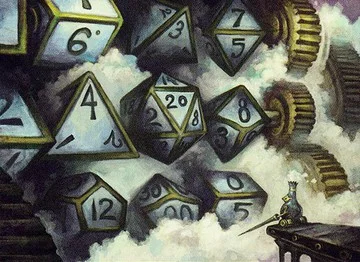 If you’re designing your own monsters, you can either use Recharge or a different mechanic of your choosing. It’s your game! Here are some alternate options to Recharge that you can use. You can either tweak existing monsters to include these mechanics, or you could design new ones that take advantage of them.

Cooldown 2: After a monster uses this ability, it can’t use it again until 2 rounds have elapsed.

Having an ability tied to Cooldown rather than Recharge makes the damage output predictable. This is both good and bad — it lessens the chance of a TPK, but can make a fight less exciting. On the other hand, it helps to guarantee that a monster will use a variety of attacks, rather than using its recharged ability constantly (or only once per fight).

Cooldown can work better than Recharge when used on abilities that disable characters. A Mind Flayer’s Mind Blast can stun characters, and it can do so multiple times in a row if it rolls well. Fun for the Mind Flayer, but not very much fun for your players who get stunned! If the Mind Blast was based on a Cooldown instead, this would ensure your players get to still take turns rather than being chain-stunned.

Recharges at Half Health (Bloodied): This ability can be used again once a monster is at half its hit points or less.

Having a monster’s ability recharge on specific conditions gives you a ton of flexibility in design. If an ability recharges when the monster reaches half health, it guarantees that the monster will be able to use its ability exactly twice. This helps to limit the creature’s damage output, while still showing off the cool recharge ability. You could have a number of different recharge conditions, including:

Using this mechanic for Recharge gives you a lot of flexibility, helps you to match a monster’s mechanics to its behaviors, and can give you extra control on when a monster can use its abilities. This can be a little more difficult to design than other Recharge abilities, since you have to put extra thought into what the recharge conditions are.

A word of warning: I would caution having an ability recharge when a PC is downed, as this can lead to death-spiral fights.

+Encourages monster to act in ways that match its temperament; builds story into design

-Possibly never recharges ability depending on recharge condition, or only recharges once when a fight drags on

Having Energy Points or Ability Points is the most complex of the Recharge mechanics in this article, but also the most flexible. You can have the monster gain energy points at the beginning of each round, and then have each of its cool abilities cost energy to use. You can have actions, bonus actions, or reactions, all cost energy, and then it can choose how to spend its Energy Points. This limits the amount of high-damage or high-impact actions a monster can do, while still giving it a variety of options. (If the monster only has one ability it uses Energy Points for, then this will be effectively the same as giving it a cooldown instead.)

You could have the monster start at max Energy Points or have it charge up over the fight if you want to portray a sense of increasing threat. Alternatively, you could combine this with the “Recharges on ____” Recharge ability, but that’s probably a level of complexity that’s unnecessary for most monsters. (An example might be a Redcap that gains an Energy Point whenever it hits a creature and sheds blood.) You could also have it gain 1d4 Energy Points at the start of each of its turns if you wanted to make it less predictable.

If a monster needs energy points for multiple abilities, it makes that monster harder to run in combat. Additionally, monsters that use this ability are a bit harder to design and test.

Other Notes on Recharge

I would recommend smoothing out the power curve of monsters slightly between when they have their recharge abilities and when they don’t. If I were to change the Ancient Red Dragon, I would tone down the damage of the Fire Breath ability and increase the damage of its melee attacks to make the fight less swingy.

Finally, I would point out that many combats only last about 3-4 rounds, but that this heavily depends on the scenario. Take the monsters’ survivability into account when designating a Recharge ability — a short fight might prevent a monster from using a Recharge 5-6 ability or a Cooldown 3 ability twice in one combat.

Tying it All Together

So, given all this, which system would I recommend? Well, any and all of them! You’ll want to pick the type of mechanic based on the overall feel and flavor of the monster. Here are some examples:

If you vary the type of Recharge ability your monsters use, it also helps to prevent metagaming, since your players won’t know exactly how each monster works.

Below is a table that can help you decide when to use which mechanic.

All art copyright of Wizards of the Coast and used under the fan creation policy.